In October of 1959, Margaret Custer Ford, a recently single mother living in Medford, Oregon inquired of a large national firm how she could become an “advertising specialties” representative, but was not even granted an interview because “women didn’t work out.” So Margaret decided to open her own distributorship. Many promotional products manufacturers did not want to do business with women back then. They would suggest that they already had representation “out West,” which meant Portland or San Francisco. Margaret would argue that those cities were 300 miles away! She took to using her first initials, and often had to sound as if she was a secretary to a man while on the phone to suppliers.

Calling on businessmen in a small town was another story. At first, they would allow a sales visit as a matter of curiosity and amusement. Eventually, Margaret was able to prove that she did know what she was talking about by helping local businesses promote their merchandise and increase their profits. She assisted many lumber producers and other manufacturers to increase safety awareness and reduce lost time accidents. Today, women outnumber men in the promotional products industry. Women like Margaret Custer Ford made it easier for later generations. Her daughter, Nancy, never even realized that women had a hard time in the business world! Growing up in the 1960’s, Nancy remembers being the first kid in town to own an imprinted t-shirt, long before logo-embellished clothing was popular.

In 1974, the business headquarters moved to Portland. Margaret continued her involvement in the national Specialty Advertising Association as an educational speaker and twice served on the board of directors. Awards include first place from the Southern Oregon Ad Club, American Advertising Federation Addy Awards and Best In The West, Portland Rosey Awards, and many Promotional Products Association International (PPAI) Bronze, Silver, and Golden Pyramids.

Incorporated in 1977, MARCO Ideas Unlimited expanded with representation in various cities. In the early 1980’s Margaret worked with an architect to design the award-winning MARCO Building.

In 1984, Margaret was named Counselor Magazine “Man of the Year”, prompting ASI to rename the award to Person of the Year.  She was honored with PPAI’s highest recognition and included in the “National Hall of Fame” in 1994.

Towards the end of the 1980’s, Margaret suggested that her daughter, Nancy, join the family business as successor. Since Nancy had been running her own successful business since 1984, she seemed a logical choice. Mother and daughter worked together beginning in January of 1992. Margaret’s interest in the business was sold to Nancy in 1995.

Nancy achieved her MAS (Master Advertising Specialist) designation in 1996. She served on the board of the regional promotional products association for seven years, including a term as President. Nancy’s husband Peter and son Tom began working at MARCO in 2005, continuing the family-business tradition.

Tom earned his CAS (Certified Advertising Specialist) in 2012 and is now the Vice President and Sales Manager.

In 2010 Margaret was again recognized with PPAI’s “Woman of Achievement Award” during their annual Women’s Leadership Conference event.  She is still recognized for her past contributions to the industry. 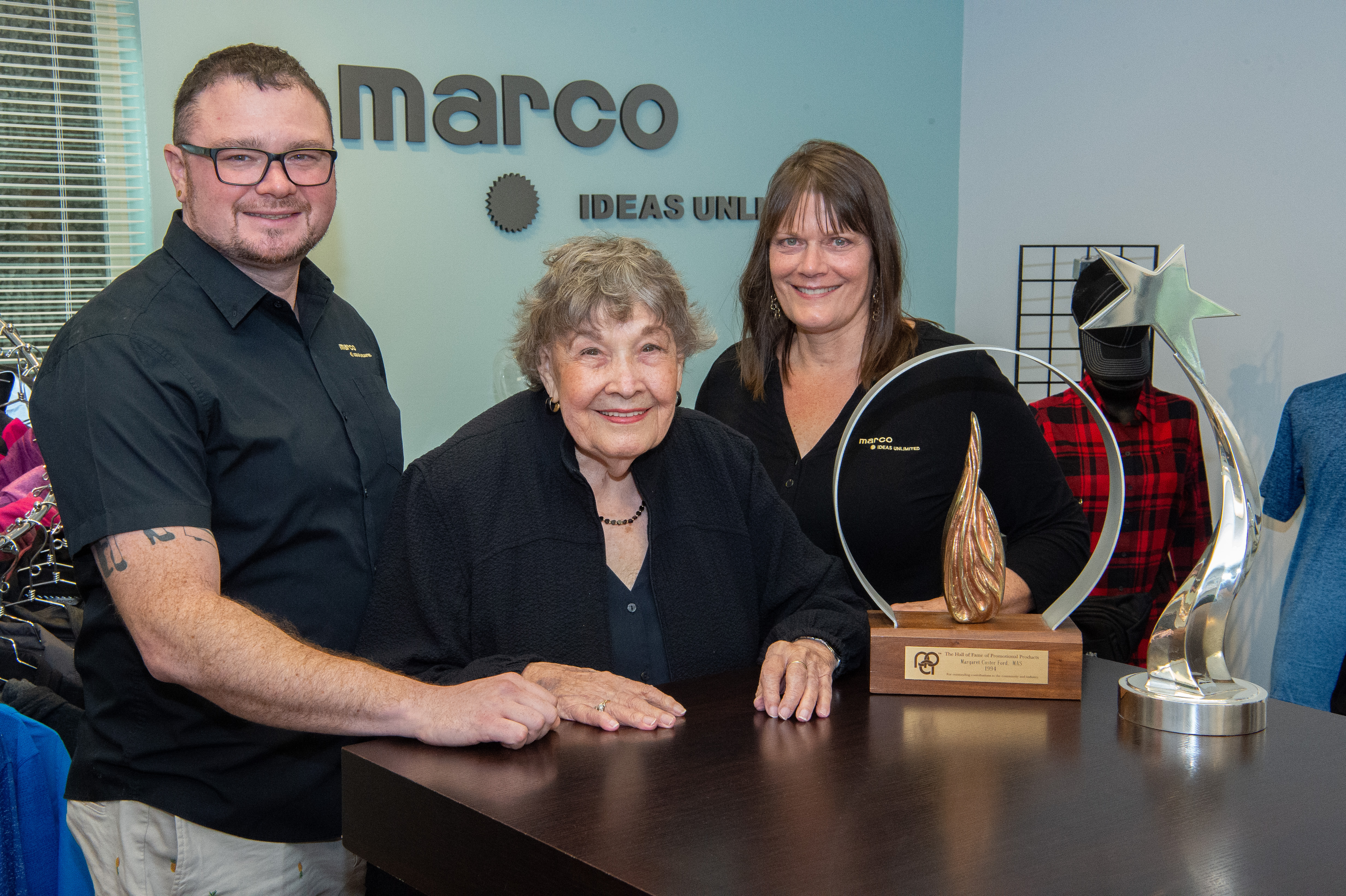